By all accounts, the brutal shooting of 20 children and six adults at Sandy Hook Elementary School in Newtown, CT in December of 2012 was a turning point in much of the national psyche. It galvanized both sides of the gun debate to take new action, and it changed the way schools thought about security and safety. The gun divide in the United States has ratcheted up further with each mass murder, and school security debates have reached a boiling point since the massacre in Parkland, Florida. While arguments over arming teachers are making their way further into the mainstream, many individuals and schools around the nation have already decided to take matters into their own hands by arming faculty and staff. Shockingly, no one official federal or state body has been keeping count of how many schools across the nation have armed staff, and in many communities, even the parents and the general public remained uninformed that it is happening.

G is for Gun: The Arming of America’s Teachers is more than a project about building awareness; it is about empowering the public to make and participate in decisions affecting their schools, their communities, and the larger society in which they live. The debate over the arming of public school employees is emblematic of many of the same political and cultural divides so pronounced in America today. Encompassing highly-charged and critical debates about gun legislation; the provision of robust social services; the shape and purpose of public education; issues of race, class, gender, and security; and the role of local, state, and federal powers in making change; this issue reflects a multitude of social issues that divide us.

The film and accompanying interactive website help to make sense of the larger social, political, and historical context that has given rise to school shootings and to the growing response with arms. Often boiled down to arguments over “more guns” or “fewer guns,” the mainstream debate can sometimes obscure the larger social questions at the root of this violence and our response to it as a society. We hope that this project will provide a forum for dialogue about the deeper issues at stake in the arming of America’s teachers. 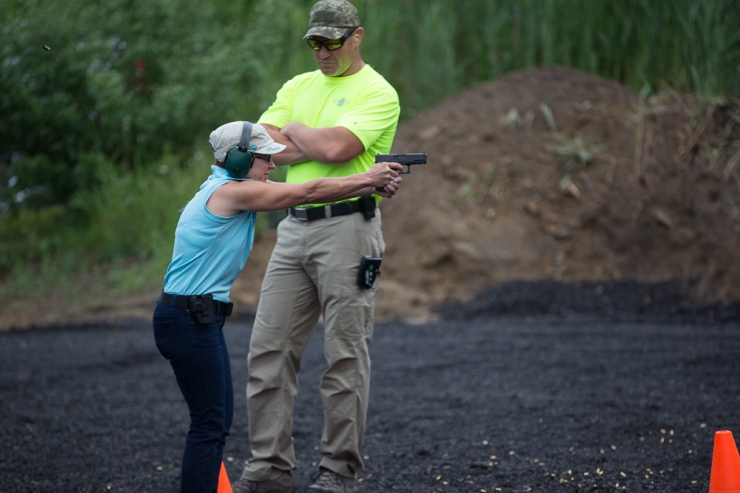 An Ohio Principal trains at the firing range

G is for Gun was co-directed and produced by two independent, Massachusetts-based artists and educators.

Kate Way is a documentary filmmaker, photographer, and veteran educator whose work is largely concerned with public policy, education, and issues of social and economic justice. She holds a doctorate in Language, Literacy, and Culture and a M.F.A. in Photography, and and has taught and researched in schools and universities for the past twenty-five years. Her specific areas of expertise include critical media literacy and the politics of K-12 public education. Kate has worked with students and prospective teachers in the United States and abroad on the development of literacy skills across mediums, and on using photography, video, and audio production to promote social change. She teaches graduate courses in Education and undergraduate courses in Photography and Video Production, and and has published and presented her academic research. Kate’s work has received significant grant funding, and her photography has been exhibited widely in both solo and group shows. Her print and photojournalism on armed teachers was recently published in the New York Times and Mother Jones magazine.

Julie Akeret has worked in film and video for over thirty years. Much of her work has focused on education, social justice and the arts. Her first film, Not Just Garbage, a film about Mierle Ukeles, artist-in-residence at the New York City Department of Sanitation, premiered at the New York City Department of Cultural Affairs and won Best Documentary Short in the USA film Festival in 1986. Julie received a fellowship from the Massachusetts Cultural Council and grants from foundations such as the Massachusetts Foundation for the Humanities, The Sister Fund and the Community Foundation of Western Massachusetts among others. In 2012, Julie received a Boston/New England Emmy for Theatre on the Edge, a film exploring the collaborative process at Double Edge, a laboratory theatre based on a farm in Western Massachusetts. Big Ideas for Little Kids: Teaching Philosophy through Picture Books, released in 2015, also received a Boston/New England Emmy and was acquired by APT for national distribution. Julie Akeret’s films are distributed nationally to educational institutions through Women Make Movies, Filmmakers Library and Bullfrog Films. Please visit her website if you want to see clips from her films.

“G is for Gun offers a remarkable glimpse into the controversial policy of arming teachers. The filmmakers have managed to encapsulate a complex issue in a visually rich and engaging documentary that ought to spark a more serious and thoughtful conversation about how to deal with school violence.”  — Saul Cornell, Chair in American History, Fordham University.

“G is for Gun is an amazing film for the conversations and critical questions it opens up about violence, guns, the assault on public education, and the history and politics of gun culture and violence in the US.”  — Barbara Madeloni, President, Massachusetts Teachers Association.

This project was made possible, in part, by funding from Ohio Humanities, Massachusetts Humanities, The Beveridge Family Foundation, and individual donations.